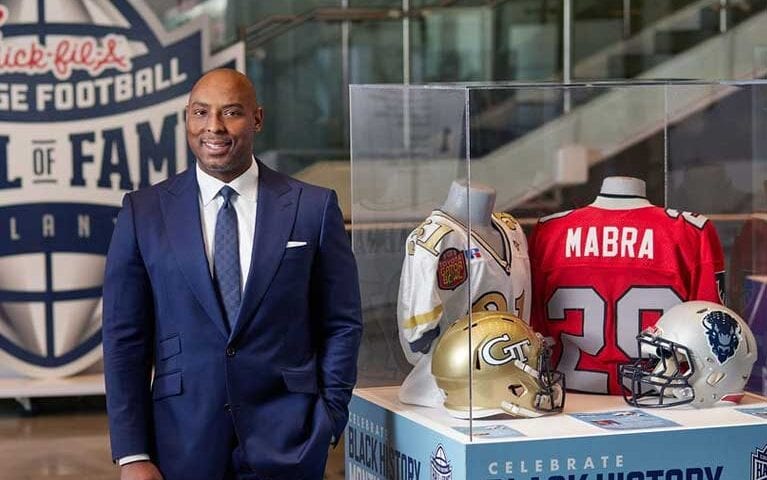 ATLANTA, FEBRUARY 3, 2021 – The Mabra Firm is co-sponsoring with Kia a special exhibit exploring the contributions made by star players and coaches at Historically Black Colleges and Universities (HBCUs.) The exhibit runs through February at the Chick Fil-A College Football Hall of Fame Museum in Atlanta.

The first HBCU football game was played in 1892 between Livingstone College and Biddle College. “Historically Black Colleges and Universities are inseparable to the story of college football,” said Jeremy Swick, CFHF historian. “They exemplify the rich history, passion, traditions and pageantry of the game.”

For Mabra Firm founder and managing partner Ronnie E. Mabra Jr., the exhibit is especially meaningful. The display includes memorablia from his late father’s collegiate and professional football careers. Ronald E. Mabra Sr. was a second-generation graduate of Howard University, where he played defensive back. After earning a bachelor’s degree in business, Mabra Sr. became one of the first Howard graduates to play football professionally. His athletic career included stints with the NFL’s Atlanta Falcons, Kansas City Chiefs and New York Jets as well as the World Football League’s Philadelphia Bell, where he was named an All-Pro defensive back.

“My father was a remarkable man. Throughout his life he applied the same values that made him successful on the field – teamwork, fairness and integrity – to his life as a businessman, husband, father and neighbor,” said Mabra Jr. “I am proud to partner with the museum, spotlighting the unique role HBCUs have held in the broader collegiate football landscape.”

About Mabra Firm
Atlanta-based Mabra Firm is Atlanta’s premier personal injury law firm, fighting tirelessly for the for the rights and wellbeing of Georgians who are injured as a result of another party’s fault or negligence. Founded in 2007 by Ronnie E. Mabra Jr., the Mabra Firm has offices in Atlanta, Warner Robins and Tifton Ga. For more information, please visit the firm’s website at https://mabrafirm.com.

About Ronnie E. Mabra Jr.
Ronnie E. Mabra Jr., founder and managing partner of the Mabra Firm, is an Atlanta native. A graduate of Georgia Institute of Technology where he played defensive back, Mabra was named to the ACC-All Academic Team. He earned his J.D. from the University of Georgia School of Law, and has since been named a Super Lawyer and Atlanta Magazine “Rising Star.” A former state representative for Georgia’s House District 63, Mabra remains politically engaged in pursuit of laws that will protect Georgia’s citizens.